Noah Oppenheim has pursued a career at the intersection of fisheries industry, science, management, and policy for over eight years. Having worked as a commercial fisherman, a federal fisheries observer, and a staffer in the US House of Representatives, Oppenheim brings a well rounded approach to the preservation of living marine resources and coastal communities to PCFFA. He earned a BA in biology from Reed College and holds two master’s degrees in marine biology and marine policy from the University of Maine.

Glen Spain is the Northwest Regional Director and Salmon Protection Program Director for Pacific Coast Federation of Fishermen’s Associations (PCFFA) and the and the Institute for Fisheries Resources (IFR) at their joint Eugene, OR office. He has been a vocal advocate for better watershed and riparian protections on both private and public lands, and currently serves on advisory committees to the Board of Forestry in both California and Oregon. He works as an advocate for sustainable aquatic resource use and the protection and recovery of salmon throughout northern California and the Pacific Northwest. He lectures widely on forestry/fishery and marine resource protection issues throughout the Pacific Northwest and elsewhere. He is also the recipient of the 1993 David Simmons Award for Environmental Vision from the Oregon Natural Resources Council, Oregon’s largest and most effective environmental protection organization. Glen received his law degree from San Francisco State University. 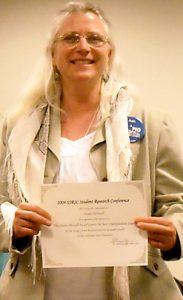 Vivian is PCFFA’s Watershed Conservation Director and manages our North Coastal Watershed program. Her work addresses coastal streamflow and water quality issues, sustainable forestry and logging practices, and commercial fishing management and infrastructure issues. She is a former commercial fisherwoman on the F/V Corregidor, and also works with the Eel River Recovery Project.

Regina has lived in the Klamath River watershed for the last twenty years, and is a long-term advocate for tribal water rights, clean water, wild salmon, prescribed fire, ecosystems preservation, and environmental justice in California and Oregon. She is a co-founder of Klamath Riverkeepers, and directed the organization for its initial three years. Regina has been a key organizer in the campaign to remove the dams beleaguering the Klamath’s anadromous fish, and to save Northern California’s forests. Before coming to IFR, she was Communications Coordinator for the Hoopa Valley Tribe and a Water Policy Coordinator for the California Water Impact Network. Regina lives in the small town of Orleans on the Klamath River in Humboldt County.

Tom retired in 2008 after serving 23 years as a Principal Planner with the Natural Resources Division of Trinity County, where he focused on Trinity River and Central Valley Project salmon and steelhead restoration. He was appointed by the Interior Secretary to represent PCFFA on a federal advisory committee for the Trinity River Restoration Program and serves as vice-chairman. He has been on the board of directors of the California Water Impact Network for 9 years, and served as its media contact for 5 years. He specializes in Central Valley Project operations, the Trinity River, and San Joaquin Valley selenium and agricultural drainage issues. He has been a member of the California Salmon and Steelhead Advisory Committee since 1991. He is a recipient of California Trout’s Roderick Haig Brown Award and the Salmonid Restoration Federation’s Lifetime Achievement Award. He is a former member of the California Department of Water Resources AB 303 Groundwater Advisory Committee. He has a bachelor’s degree in environmental studies and biology from UC Santa Cruz.

Harriet Lew is the Finance Officer for the Institute for Fisheries Resources. Harriet has numerous years of financial and administrative experience working for the non-profit sectors, especially within the marine environment organizations. Her work experience included Oceanic Society and The Farallones Marine Sanctuary Association. She received her B.A. in Social Welfare from the University of California at Berkeley and her accounting certificate from UC Berkeley Extension.

From 1992 to 2015, Zeke Grader was Executive Director of the Institute for Fisheries Resources, an organization begun by the Pacific Coast Federation of Fishermen’s Associations. Zeke worked to assure sustainable fisheries, including measures to protect against overfishing, decreasing bycatch, rebuilding depleted fish stocks and protecting and restoring fish habitats. He served as the president of the western region of the old National Federation of Fishermen and the West Coast Fisheries Development Foundation, and as well as on the board of directors of the Marine Fish Conservation Network. As a result of his work promoting sustainable fisheries and the protection of habitat, Grader was the recipient of numerous commendations and awards during his illustrious career, including the 1998 U.S. Department of Commerce Environmental Hero Award. His wit, congeniality and dedication to the small boat fishing fleet cannot be replaced.